Good morning everyone! Before you proceed, click on the follow button at the top right corner for more update. Here are some of the news that you should not miss this morning: 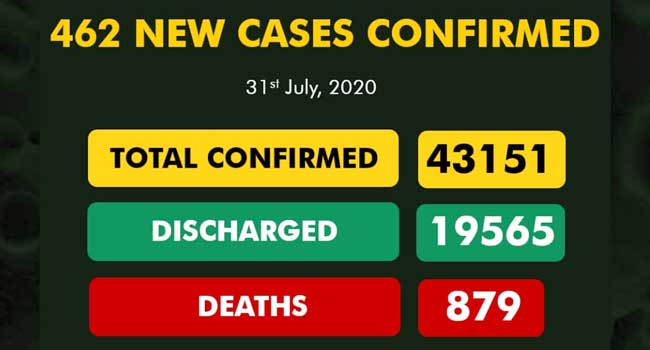 Nigeria has recorded 462 new cases of the novel coronavirus, bringing its total infections to 43, 151.

This is according to the nation’s top disease control agency. The strike, according to the Nigerian Labour Congress(NLC), Trade Union Congress(TUC) and Joint Negotiating Council (JNC) was to pressure Governor Kayode Fayemi to pay outstanding salaries, allowances and pension arrears of their members.

Some 30 Nigerian girls who were trafficked to Lebanon have appealed to the Federal Government to rescue them as they are currently stranded in that country.

They made the appeal in a statement by the President of Journalists International Forum for Migration, Mr Ajibola Abayomi, which was made available to the News Agency of Nigeria on Friday.

Abayomi noted that the girls were all camped in one room with faulty toilet and other utilities, as they were presently housed in a building at Dawra city in Lebanon.

Thanksgiving: Paying Back or Paying Forward to God?

I love to be simple, chic, not dramatic– Actress, Seilat Adebowale

Not a single offer received for Leverkusen’s Harvetz – Rolfes

Nvidia is in advanced talks to buy chip company ARM At least 10 persons have been confirmed dead while three others were still missing after a boat capsized in Lagos. Borno State Commissioner of Police, Mohammed Aliyu, on Friday, said the death toll during Thursday’s attack on Maiduguri by suspected Boko Haram members had risen to six with 27 injured.

What Sam Momah said about Nigeria before he died on Wednesday At the presentation of what turned out to be his last book on July 6, 2020, former Minister of Science and Technology, Major General Sam Momah (retd) left some food for thought in the consciousness of journalists, guests and dignitaries at the event. The book (his twelfth) “Why We Must Restructure Now,” is arguably the most authoritative piece of literature on the subject matter till date.

Here are some of the things he said at historic event.

“Restructuring is not resource control. It is instead a globally agreed win-win strategy of replacing fossil energy with renewable energy in order to check effectively the worsening menace of global climate change which is causing floods of tsunami proportion, soil erosion, desertification and bush fire.