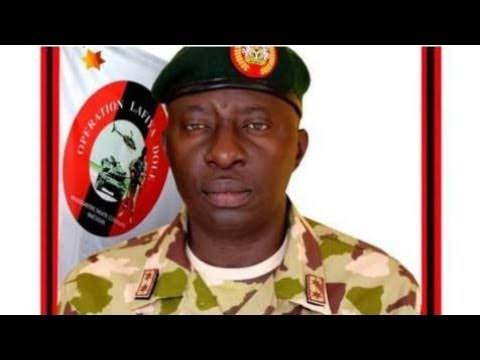 A pan-Yoruba group, Yoruba Youth Forum, YYF has called on the authorities of the Nigeria Army to urgently release General Olusegun Adeniyi, former theatre commander of Operation Lafiya Dole from detention.The group in a press release by its President General, Comrade Abiodun Bolarinwa said that the purported video in which General Adeniyi complained about lack of weapons to fight insurgents in the North East was done out of patriotism for Nigeria and not to embarrass the military.

“General Adeniyi made the video out of patriotism and not to embarrass the military. Our soldiers are getting killed everyday owing to lack of weapons to fight the insurgents. It is so sad that a patriotic soldier like Adeniyi could be treated like this.”

He added: “We have gathered that General Adeniyi will be facing court-martial after he was removed as the theatre commander of Operation Lafiya Dole.”

Comrade Bolarinwa who wondered why the top Yoruba military who has since being transferred to the Nigerian Army Resource Centre in Abuja after the video could still be made to face military trial.

“As a Yoruba group, we found it very disturbing that after Adeniyi , a Major-General was removed as theatre commander of Operation Dole and transferred to Abuja; why must he made to face court-martial. This is clearly an injustice to Yoruba people by those who think Nigeria belong to them.”

Calling for immediate release of General Adeniyi, Comrade Bolarinwa warned that nothing bad must happen to Adeniyi in detention.

Speaking further, Comrade Bolarinwa also added that many Yoruba military officers have died in questionable ways in the past and that many are currently facing persecution for telling the truth.

The Group therefore urged all Yorubas both home and abroad to speak with one voice and call for the release of General Adeniyi who is currently in detention.