…Says “we have very weak set of governors   in Southeast” 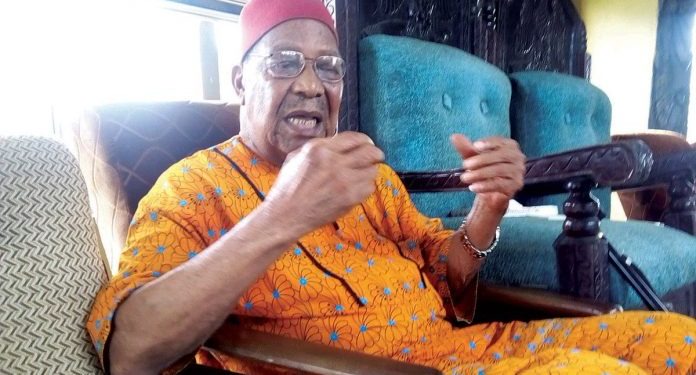 Foremost nationalist and elder statesman, Chief Mbazulike Amaechi, has expressed fears over the increasing clamour for the South East region to produce the president in 2023.

In this interview, the vocal First Republic Aviation Minister spoke on the need for the Igbo to reconcile with the North if they want to brighten their chances of clinching the number one position. He also decried the brazen killing of Ndigbo in their state by security, alluding that the killers are emboldened by the set of ‘weak governors’ the region has. Excerpt:

What’s your take on the recent clash at Enugu between members of IPOB and the police?

I really don’t know much about that because I haven’t got the details. I cannot say because for example, some delegations that met at my house, alongside the President of Ohanaeze youths who were part of the team told me that it was not IPOB that was involved in the clash. I learned that it was another group with a different designation. And that they assembled to say prayers and hold their meeting when some security men went to attack and dispersed them. But the group defended themselves. Now the scuffle had already finished when more men in uniform arrived at the scene and started shooting anybody they saw. That was what the Ohanaeze youths told me. So I really don’t know what happened. But I have told IPOB that they must never resort to violence. It is their cardinal policy, but that does not mean that when a lion comes to attack you that you should not defend yourself the best you can.

The scenario happened at Oraifite and they defended themselves, that was IPOB, but I don’t know much about the killing at Enugu because IPOB says it’s not them. It is quite sad because these security officials believe that they can kill the Igbo without anybody asking any question. And this continues to happen because we have a very weak set of governors in the Southeast.

The politicking of 2023 is already heating up, what do you make of the whole frenzy and clamour for a president of Igbo extraction?

2023 is crucial to the unity and existence of Nigeria, particularly as the Igbo are concerned. If Nigeria accepts to elect an Igbo president of Nigeria, then we will be there to work for Nigeria. We worked for the independence of Nigeria more than any other section of the country, so, we’ll be there to work., but if in 2023, they still think that Ndigbo should be treated as slaves or second class citizens of Nigeria, then the Igbo would give a second thought to their being in Nigeria. We’ll give a second thought to it. It’s not going to be easy because it’s not going to be violent. We’ve tried it with violence with Biafra, it did not work, but this time new strategies have to be worked out. And that is the essence of the Ohanaeze/ IPOB arrangement which was made in my house. We intend to work for 2023. But if in 2023, Nigeria rejects us, then we have to resort to the Igbo saying that Onye ajuru anaghi aju onwe ya ( He that is rejected doesn’t reject himself ). But we hope it will never get to that. I personally hope it will never get to that because we are working to be in Nigeria, and to be fully part of Nigeria. There are great political, economic, military, and power advantages in being a big country. If we have a corrupt system today, that does not mean that it would not come to pass. The world is moving around, everything moves and comes around.

Looking back at your time, the Igbo played better politics than our present crop of politicians. Do you agree to this notion, particularly  in the ability of the Ndigbo to woo other regions?

In our time we were nationalists. we fought for independence. Nigerians handed us power, and we continued to rule as nationalists without expecting any gain. We only thought of the best we can give to Nigeria, not what we can get out of Nigeria. We only thought of how to make Nigeria the best in Africa, and have a country that can challenge the big countries of Europe and Asia, until the military struck in 1966. The Igbo were edged out because of certain political mistakes by military rulers in those days that led to war. But from indication so far, a great majority of Nigerian people who are reasonable are seeing the justice in our case, and I believe we are going to have a favourable result, but to have favourable results, the Igbo would have to work for it, nobody would dash you independence on a platter, you have to work, strategize, plan, scheme; you have to do everything possible to get it. You take political power, it’s not given and I can tell you that we are working on that. I’m making my little experience available to our people. God has placed me in that father position, kept me alive, and prepared me. I didn’t know that was why God was preparing me for when it was raised to become the engine room of the NCNC politically. I was the party’s principal organising secretary, and master of strategy and politics. Also, God thereafter made me pass through governance and politics of Nigeria, both inside and outside the government, both in politics and outside politics. And so God has taken a long time to train me for this. I didn’t know that was going on in the minds of God, and He has spared me; at the age of 91 going to 92, I am still able to go to work in my factory, I drive myself within my compound and around the village. I don’t drive outside, not that I can’t, but I just want to do it that way. God has given me reasonable good health. My real trouble is Rheumatism and waist pain. and recently in 2017, I’ve been having problems in my heart, but at every stage when the thing is about to come, God says ‘no it’s not yet time’, and so I thank God. Now, I realised that God has an assignment for me, and I’m not going anywhere until I have accomplished that for Ndigbo and for Nigeria.

What if this whole 2023 project fails, and the presidential seat is not given to the Igbo, does that mean that Southeast leaders and groups would now back IPOB’s clamour for Biafra?

The present IPOB may not be what would emerge if Ndigbo is not given a chance in 2023. We are not asking to be given the position, we are asking to be given a level playing ground, that is all. So, the present IPOB organisation is not the plan of Ndigbo in 2023 if we fail in our objective. But I’m confident that we would not fail because of the reactions I get from the North. The thing is that the Igbo lost a chance when they allowed themselves to be edged out from the North. No politician in Nigeria can succeed nationally and particularly as far as the office of the 0resident is concerned without the North. The nlNorth is a very powerful section of this country both in population, experience, and positions. And each time the Igbo work with the North there was peace in Nigeria. But each time the Igbo and the North break away crisis comes. That was our experience after the coup, even after the civil war. In the Shehu Shagari government, the original plan which I made with Osadebe and R.B.K Okafor, was for a Zik (Nnamdi Azikiwe) and Shagari ticket. I led the delegation while Shagari led the delegation from the North and we always met in Lagos. The northern delegation comprised Shattima Ali Monguno and Sunday Awoniyi, and my delegation comprised Osadebe and myself; we worked out an agreement that Zik would be the presidential candidate in 1979, and Shagari would be his running mate. We also agreed with the man from the northern side that Zik would work for one term and step aside. And so we asked Zik to accept that agreement because by the time he has done one term he would be about 87 or so, and we thought that would be the appropriate time to resign. But suddenly people like Jim Nwobodo and others came into the thing with their own ambition. They went and deceived Zik and told him to come to NPP that they would push him through as president. However, Zik realised his mistakes after the election when he lost the presidential elections. He then agreed again to work with the North by NPP and NPN forming a coalition government, sharing offices. This continued until 1983 when Awolowo and others went to Nwobodo, Mbakwe, and said that they are progressives. And the North and the East fell out again till the 1983 coup. So, each time we were together, there was peace in the country. Any section that wants to rule this country must recognise the importance of the North. And the North must not take undue advantage of this importance God has given them by population and spread, they must also recognize that there is reciprocity in the whole thing. It should be a matter of give and take, and then there would be peace.

So, my advocacy is that there should be peace and I want to take the Igbo back to reconciliation. Right now, the Igbo have no quarrel with the Yoruba or the South-south people. It would appear that the North is where the problem lies, and I want to lead the Igbo to effect a reconciliation with the North so that we can all have a whole happy family of Nigeria – North, East, West, and South, all united in peace and fraternal love and unity, that is what I want to work on, even though I’m working mostly from my home because I can’t do much travelling, but most meetings are now held in my house and people come here for regular consultations.

Political watchers always raise concerns about the antecedents of Ndigbo and their knack to refuse to step down for one another. They cite example at what happened in 1999, where many believed that Alex Ekwueme stood a better chance to get block votes from the Southeast zone against Obasanjo at the PDP primaries, but Jim Nwododo joined the race. And this divided their votes. So do you foresee duplicity of Igbo candidates? Do you nurse fears of betrayal by the Easterners themselves?

That is a reality in politics. in politics, you expect disappointments, betrayals, disloyalties, opportunism, careerism. So, these are the things you find in politics. So, I will not be surprised if as we go along there are betrayals, disappointments. As Zik told us, that in Nigerian society, particularly Igbo society, if you want to attend an area with 10 people, by the time you get there, if you look back, about three or four at least have dropped off on the way. But it won’t stop you from going to where you are going to. Nwobodo betrayed Ekwueme at that time, but also don’t forget that at that time the military who were handing over, and who was handling everything wanted to compensate the Yoruba for Abiola’s issue. So, Obasanjo was the favoured one.