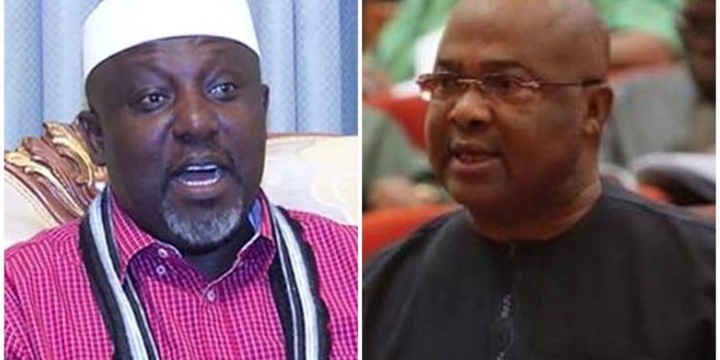 Former Imo governor, Rochas Okorocha, and his successor, Hope Uzodimma, are entangled in verbal war over the true founder of the University of Agriculture and Environmental Science, Umuagwo in Ohaji/Egbema Local Governmner Area of the state.

While Uzodimma, in a statement by his Media Aide, Oguwuike Nwachukwu, said his boss founded the varsity, located in Umuagwo,  Okorocha, in a counter claim, boasted that the tertiary institution is his brainchild.

Okorocha, in a statement, through his Special Adviser on Media, Sam Onwuemeodo, yesterday, said the protest by the academic staff union of the polytechnic and some other interest groups, delayed the take-off of the university until he left  office.

The former governor said he did not only get the approval and the licence for the take-off of the university, but also appointed the vice chancellor, Peter Akanwa.

Okorocha said he equally constituted the university governing council with Rev. Fr. Wence Madu as chairman and seven other members, including Thomas Obiefule. All event, he said, took place in April 2019.

“Okorocha, as governor then, founded the University of Agriculture and Environmental Sciences, which he located at the premises of Imo State Polytechnic Umuagwo, with campus at Aboh/Ngor-Okpala. While, the Umuagwo Polytechnic was relocated to Ehime Mbano,” he said.

“In fact, NUC Executive Secretary, Abubakar Rasheed, while handing over the licences to me, said the three additional universities have been recognised as the 50th, 51st and 52nd state universities respectively and as the 172nd, 173rd and 174th universities in the nation’s university system also respectively, with effect from May 7, 2019,” Okorocha said.

But Uzodimma has described his claim as a blatant lie. The governor said if it were true that he founded it, the feat would have received a wider publicity.

Uzodimma said: “That is a blatant lie, and, of course, you know that Okorocha is not somebody that will found an institution of that calibre without making a noise about it if he had a hand in it, everybody knows that.

“I think he should allow the governor to do the work he has come for, he has enough problem to grapple with, for instance, the Eastern Palm University that the circumstances under which it was founded is cause of worry to everybody, including those living there.

“He should solve that problem rather than facing the one that is taken off on a smooth plane.”