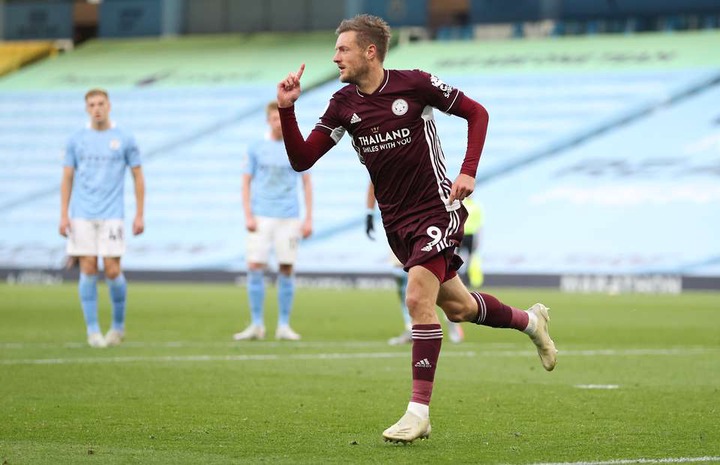 The Leicester City striker has caused City many problems in recent years and he was at it again during their clash at the Etihad Stadium on Sunday.

Vardy scored a hat-trick as Brendan Rodgers’ side completed a memorable 5-2 win.

Man City went ahead in the fourth minute through Riyad Mahrez’s stunning right-footed strike, but that was as good as it got for the hosts.

Kyle Walker conceded a penalty shortly before the interval when he brought Vardy down inside the area.

The 33-year-old got to his feet to convert past Ederson.

He bagged his second goal of the game in the 54th minute when he casually flicked the ball over Ederson. Sky Sports co-commentator Gary Neville labelled it a ‘Cruyff dink’.

But Vardy wasn’t done terrorising Pep Guardiola’s men. He won a penalty just before the hour mark after beating Eric Garcia to the ball and dispatched from 12 yards once again to complete his hat-trick.

It was a masterful performance from the Leicester striker, who improved upon his already fantastic record against the 2018/19 Premier League champions.

He now has eight league goals and an assist in his last nine appearances against them.

Man City can’t wait for the day he’s no longer around, that’s for sure.

James Maddison scored with a scintillating strike and, after Nathan Ake scored to make it 4-2, Youri Tielemans scored a late penalty to cap a miserable afternoon for City.