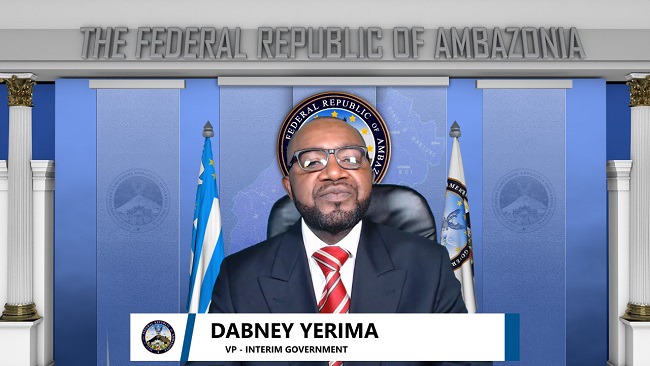 Today marks the third anniversary of the restoration of our independence. We started with peaceful demonstrations of hope in 2016 but have become the prey of a hostile regime in Yaoundé. We observe today therefore in challenging times not, as a victory but a celebration of fortitude and truth.  I come to you today at the end of a week that has observed the marauding forces of La Republique du Cameroun slaughter four innocent young men in Bamenda. Last week, a mother and her two sons were executed in Lysoka, Buea. Unfortunately, such barbarisms are now daily occurrences for our people in the Southern Cameroons.

When the United Nations was founded in 1945, nearly a third of the world’s population lived in territories that were forcefully governed by colonial powers. The international trusteeship system was established by the UN Charter affirming the principle of self-determination. Seventy-five years after this affirmation, the people of Southern Cameroons are still languishing in despair in their country under a brutal neo-colonial regime. Seventy-five years after the affirmation of the principle of self-determination by the UN Charter, the people of Southern Cameroons are slaughtered for proclaiming their right of self-determination.

The independence vote by the people of the Southern Cameroons was endorsed by UNGA Resolution 1608 (XV) of 21 April 1961. At the time of the adoption of this Resolution, UN membership stood at 100 states.  Sixty-four states voted in favour of independence for the Southern Cameroons. The geographical spread of these states covers all the continents of the world. The 64 states included three of the Big Five in the UN Security Council, namely, the United States of America, the United Kingdom of Great Britain and Northern Ireland, and Russia.

Since we restored independence on 1 October 2017, we have lost 10,000 of our fellow citizens, we now have over 1 million internally displaced persons, 421 of our villages have been burned down by the French Cameroun military, 100,000 of our people are living as refugees in Nigeria. Our leader, Sisiku AyukTabe, and his leadership were abducted in Nigeria and now unlawfully detained in La Republique du Cameroun.

In the coming weeks, we shall begin to see a steady flow of reports on these cases by the various Special Rapporteurs and Working Groups. Already, two reports cover the murder by Biya’s troops of several civilians perpetrated in Belo, Bamenda, Buea, and Ekona between February and October 2018. Another report dated 7 July 2020 on the Wazizi case and the Kingsley Njoka case is out. As is the practice and procedure, these reports are addressed to the Yaoundé regime with a request for its response.

But we know its response to these cases. And we know beforehand its response to scores of other cases still to come. It is incapable of saying anything else other than making barefaced denials. It is so morally bankrupt that it is unable to take responsibility for the genocide it is perpetrating and hoping that by some miracle it will escape accountability. Barefaced denials are its shameless familiar line. In the numerous cases against it in the Human Rights Committee going back to the 1980s, it has sung this familiar song and in each case, it has lost.

Fellow Ambazonians, going forward, lawyers local and international working for the Interim Government  will be instructed to institute proceedings against the Yaoundé regime and its military for each case of murder, rape, torture of any civilian as well as for any case of pillage, theft, arson, destruction, and looting. It is our responsibility to protect our people and land and we must not shrink from it.

In the history of mankind, only a few generations have been tasked with the role of fashioning freedom and independence for their nations. This is an arduous responsibility which I hope and pray that as a generation, we do not shrink from. Despite the challenges of the last three years, the energy and devotion which we bring to this revolution going forward is key to the victory we seek.

Our people in the bushes and the refugee camps struggling to break the bonds of misery and fear must know that love and truth can never be suppressed forever. Despite the setbacks of the last few months and the challenges of these last three years, I urge you to keep the faith. We are a stricken people in a world that has abandoned us. But we must not entertain thoughts of defeat nor contemplate a return to the status quo.

Fellow Ambazonians, it is our duty in this generation to fight and if necessary die for our freedom and independence. By our courage, determination, and poise, our independence and freedom are permanent. France and her puppet regime in Yaoundé must know that our right to self-determination is non-negotiable. The Never-Again-Generation of Ambazonians is unwilling to continue under servitude and oppression.

Even as the enemy believes that she will exterminate us, I implore you all not to lament for I see hope in our struggle. We shall pay any price; bear any burden to assure our liberty. This, we pledge as a people. United there is nothing we cannot do.  Our temporal challenges and losses are sadly within the context of our chosen goal of independence. Let history be the final judge of our actions. As a people, let us go forth to defend our land knowing that if it is to be, it is up to us.

To all our women, especially the Takumbengs, we salute your courage. Your peaceful March of 22 September 2017 set us all off on this challenging but worthwhile journey.

To all the free and independent nations of the world, our best hope is your conscience. We call on you to show compassion and humanness. Ours is not a drive for power, but a just fight for independence and freedom. It is a colossal blunder for the world to continue to overlook the genocide in our country. In French Cameroun today, we see failure, backwardness, and unprecedented evil. In French Cameroun today, we see a failed state on borrowed time.

There is a legitimate question about our attitude towards the people of French Cameroun. The people of Ambazonia make a huge distinction between the French Cameroun imperialistic regime and the people of the country. Our disagreement is with the imperialism of their government backed by France and buttressed by the silence of the world’s nations. The people of La Republique du Cameroun must understand that despotism and neo-colonialism produce economic and social backwardness because it impedes the human impulse to create. Despotism and neo-colonialism find peace and unity offensive. We don’t intend therefore to exchange one wickedness with another.

To the murderous regime in Yaoundé, no matter how long you unleash your wickedness and barbarism upon us, we shall overcome and our independence and freedom are everlasting. The people of Ambazonia shall oppose aggression and subjugation until the end. There will be no peace in La Republique du Cameroun until she pulls her military out of Ambazonia.

With regards to ending the war between our two nations, let it be known that civility is not a sign of weakness and as a nation, Ambazonia shall never negotiate out of fear but we shall never fear to negotiate.

Fellow Ambazonians, in your hands, rest the success or failure of our cause. Plenty is at our disposal but we must start using our talents and opportunities persistently and wisely. As a nation, we are half-awake.  Be reassured that as your leaders in detention are standing tall and marching forth to the foot of the mountain despite anything that is thrown at them, I call upon you today to keep your eyes fixed on the prize-FREEDOM.

It is our responsibility to protect our freedom and independence. Our nation is asking for action from all of us to lead to achieving this commanding goal of independence. Let us be ready and willing to submit our lives for the action of attaining our freedom. If we all pull together, the enemy will be defeated and Buea will be a reality soon.

God Bless You All.